Another 50 Weeks of Art


I learned so much completing 50 weeks of art in 2012 and 2013, I decided to continue my pace for 2014.  I considered it a good motivation to complete some previously started projects, or UFO's (Un-Finished Objects as quilters like to call them).


I had some small circular kaleidoscopes that I had printed to fabric back when I was taking the color class which I had never used.  Since Quilting Arts magazine had posted a new reader challenge called 'In the Garden', I thought these kaleidoscopes would make a fun flower piece for that challenge.  I chose a batik background, some strips of a couple different fabrics for the stems, and a few leaves that I removed from some silk flowers.  I stitched the entire background first, layered the stems and leaves, and finally appliqued the kaleidoscope 'flowers' on top.  My 'Garden Whimsy' piece appeared in the June/July issue of the magazine. 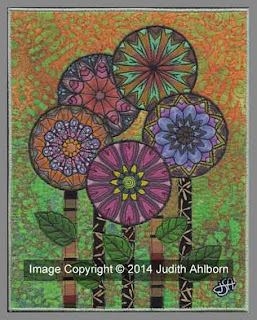