In April of 2011, I started taking a color class, The Language of Color and Design, also taught by Heather Thomas.  I had plenty of friends who had taken it, and I had been wanting to take it for some time.  The class met once a month for a year, and there was a project due each month that represented a different color concept.  It was during this year of class projects that I began using my computer to help with my design process.


The first graphics programs that I used were Kaleidoscope Kreator and Scrapbook Factory Deluxe by Nova Development.  I had used the scrapbook program many times before as I had been making digital scrapbooks of my daughter’s school and dance photos.  The kaleidoscope program I had bought because it looked like total fun, but I had only played around with it some.  I thought I could create some kaleidoscopes, print them to fabric, and then incorporate them into my art pieces.


The first piece to incorporate my use of digital design was the project using the analogous color scheme.  This was the fifth project for the class.  The fabric kaleidoscopes were shaped like blossoms and appliquéd on top of a fabric collage using the colors ranging from yellow green to red orange on the color wheel.  Here is a picture of this piece.  It measures 16 x 20. 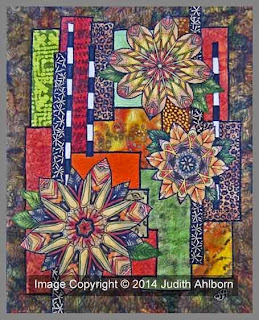